Mikes Electric was honoured to work on the electrical updates for the Eric Harvie Theatre revitalization project at the Banff Centre for Arts and Creativity on Tunnel Mountain in Banff, Alberta.

Announced on November 3, 2020, the venue took a new name, the Jenny Belzberg Theatre, as a part of a gift from the Belzberg family to honour the Calgary-native community builder and philanthropist, Jenny Belzberg.

Speaking to the prior eponymous theatre’s name, Eric Harvie (April 2, 1892 – January 11, 1975) was closely involved in funding the Banff School of Fine Arts in its early days.

“Alberta’s most generous philanthropist,” as coined by CBC, Harvie was an important person in the world of Canadian philanthropy, and played an integral part in the artistic development in the province of Alberta.

In the beginning, he was a Calgary lawyer who struck massive oil reserves in central Alberta in 1947 and 1948. He became very rich as a result of this venture, and in combination with his passion for history and culture, Harvie’s other resulting life accomplishments include the establishment of Calgary’s Glenbow Museum, Heritage Park, and the Calgary Zoo.

No matter the name, this historic theatre has hosted the likes of many performers, artists, speakers, activists, educators, creators, and audiences over the course of its last 52-years in operation; from local talent in the K-12 Christmas Concert, to multiple award-winning productions, like King Arthur’s Night, and Pride and Prejudice.

Needless to say, this venue was very special to work on with its history being derived in the building blocks of the performing arts community in Banff – and that in Alberta – over the last 70 years.

We welcome the Jenny Belzberg Theatre into the newest chapter in this theatre’s history.

Take a closer look into the construction phase: 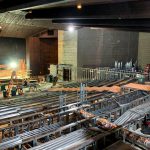 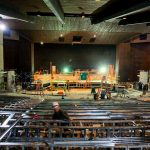 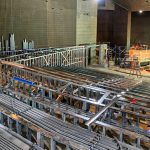 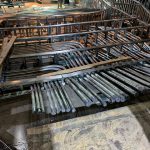